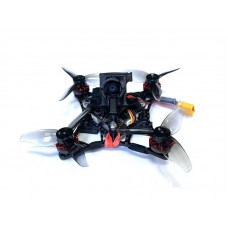 Looking for that first build? This super lightweight 1-2S 2" build provides outstanding speed and performance for its size!

The frame was designed by fellow Canadian, Kevin Langlois AKA Tarkusx_FPV. The components have been carefully chosen and work seamlessly together.
You can make it 1S compatible or 2S! After doing lots of testing we found that it flies best using a 2S 300-550mAh battery. We were able to get 5min of flight time with incredible agility and speed. You can use up to 2S 600mAh HV for longer flight time.
Using a 1S 450mAh, we were able to get around 5min of flying but with more throttle required and much less agility compared to the 2S setup.
The only part that requires soldering is the pigtail (which we can do if you don't want that hassle), the rest is plug and play!

Please Login To Review This Product